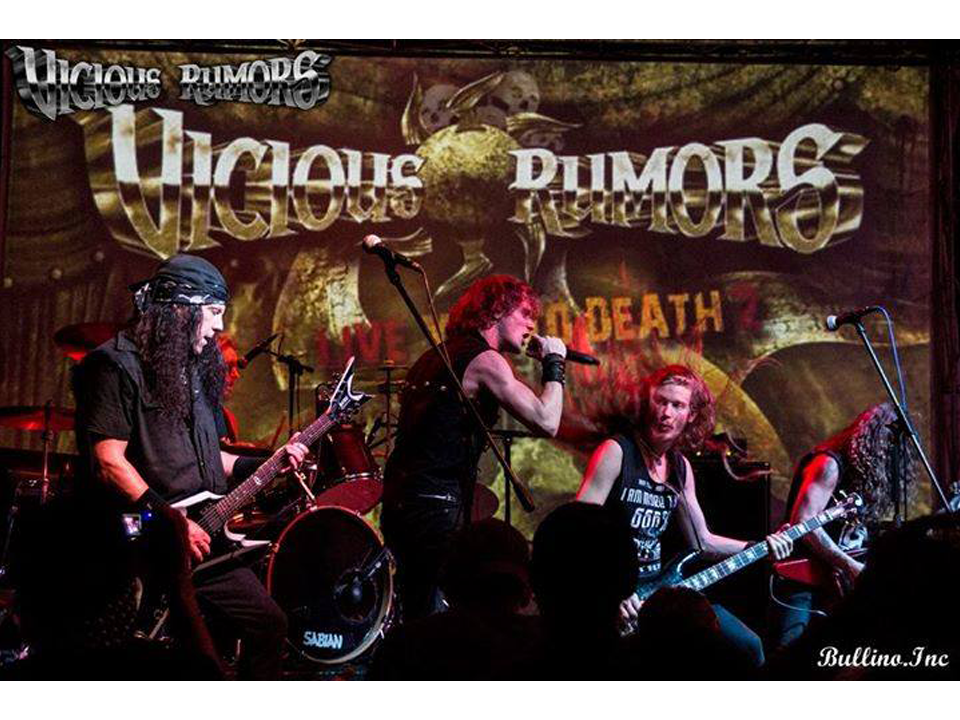 Vicious Rumors is an American power metal band, originally formed in 1979 in the San Francisco, California Bay Area. The band was conceived by founder & guitarist/vocalist Geoff Thorpe, and the band has been actively recording and touring worldwide since their full-length recording debut in 1985

Guitarist and composer Thorpe began his musical career as a teenager in Honolulu, Hawaii. Thorpe had set out to start forming the band in the San Francisco Bay Area during the summer of 1979. Other Bay Area-based bands like Exodus,Metallica, and Death Angel were also starting out during that era. These bands were playing the same local venues and establishing the Bay Area thrash metal scene—which in a few years would become very popular worldwide.

While working towards a stable lineup, early incarnations of Vicious Rumors played live extensively within California’s Bay Area between 1980 and 1985. Their first studio recordings appeared on compilations such as KMEL‘s New Oasis and U.S. Metal vol. III and IV in 1982, 1983 and 1984. These recordings helped the band obtain their first record deal with Shrapnel Records.

The band’s first full-length album Soldiers of the Night was released in 1985, and it quickly began to establish VR’s worldwide reputation. This release is sometimes classed as a milestone in power metal. The lineup at that time included guitarist Thorpe with Larry Howe (drums), Dave Starr (bass), Gary St.Pierre (vocals), and a young guitarist namedVinnie Moore. (Vinnie originally lived in Delaware, but was recommended to the band by Shrapnel Records founder Mike Varney

1987 saw vocalist Carl Albert (Villain, Ruffians) and guitarist Mark McGee (Overdrive, Starcastle, and later with Gregg Allman) replace St. Pierre and Moore respectively—prior to the recording of the band’s second album, Digital Dictator. This release helped define Vicious Rumors’ classic lineup and sound.[8] Digital Dictator was the years’ #1 album in one of Germany‘s top metal magazines, RockHard. The album sold well in Japan, the US, and the rest of Europe.[4] Vicious Rumors became an international live act at this point: they were invited to appear at the Dutch Aardschok Festival (alongside Megadeth, Testament, and Nuclear Assault), the Dynamo Open Air Festival (where they played in front of 40,000 people), and at live festivals with Death Angel and Forbidden.

An increase in popularity began to generate interest in the band from major record labels, and in 1989 they signed a deal with Atlantic Records. Their first Atlantic release was the self-titled Vicious Rumors in 1990. The band subsequently began their first full US tour—which lasted for over 3 months and shot their first official video: “Don’t Wait for Me” (directed by Gore Verbinski). This tour was quickly placed in rotation on MTV’s Headbangers Ball. 1991 saw the release of Vicious Rumors’ 4th album, Welcome to the Ball. This recording received Bay Area Music Awards nominations for “Best New Metal Album” and “Outstanding Metal Album” (other nominees included Metallica and Tesla). Their 2nd MTV video, “Children”, went beyond the exposure normally limited to metal bands on Headbangers Ball. It received regular daytime air play. The band finished the year with a one month European tour—with Savatage—and 4 months worth of live US performance dates.
After a 1992 tour with label-mates Savatage and the release of the live album Plug In and Hang On: Live in Tokyo, guitarist Thorpe was diagnosed with carpal tunnel syndrome. He was forced to undergo surgery.[14] During the year-long hiatus for Vicious Rumors, the band parted company with both Atlantic Records and Dave Starr.

After Thorpe recovered, new bass player Tommy Sisco (ex-Villain with Carl Albert) was recruited. The band’s 6th album, 1994’s Word of Mouth, was recorded and released on the Rising Sun label. The CD included the song “Thunder and Rain” (parts 1 & 2), which was dedicated to the memory of Criss Oliva of Savatage.

Sales of “Word of Mouth” were strong, the reception was positive, and the band resumed touring to support the release. Vicious Rumors was now becoming increasingly popular in Europe, they were invited back to the Dynamo Open Air Festival in the Netherlands. They also joined forces with Accept for several summer festival dates. The band returned to Europe later that year for more live shows, this time with Metal Church, Zodiac Mindwarp and the Love Reaction, and Paul Di’Anno‘s Killers.

After returning from a European tour with Savatage, singer Carl Albert was killed in a California Bay Area car accident on April 22, 1995. Around the same time, Mark McGee left the band. Steve Smyth (future member of Nevermore, Testament and Forbidden) was recruited as his replacement.

Upon Albert’s death, the band released A Tribute to Carl Albert (culled from non-soundboard recordings taken from the Word of Mouth European tour), and their first home videoThe First Ten Years. Additionally Mark McGee composed and recorded the song “Find Your Way Home” for one of his solo projects (currently unpublished) and dedicated it to the memory of Albert.

The band decided not to replace Albert at that time, and Thorpe assumed the role of vocalist for the band’s next album: Something Burning. This album was released in 1996 on the Massacre Records label. The song “Perpetual”, included on the album, was the last track written with Albert. The resulting reviews of the new release were favorable, and VR subsequently undertook a European tour with Accept to support it. Cyberchrist, their next studio album, was recorded and released in 1998 with newcomer Brian O’Connor on vocals. The band was invited by Blind Guardian to join them for 30 tour dates on their highly successful “Nightfall in Middle-Earth” European tour.[4] The band then took some time off from touring and recording primarily to recruit new personnel. They recruited a new bass player, Cornbread, who replaced Tommy Sisco, and Ira Black (ex Heathen—later with Lizzy Borden) filled the spot left by departing guitarist Smyth. Session players Atma Anur, Dan Lawson and Will Carroll (later with Death Angel) briefly sat in for drummer Larry Howe—who at the time wanted to take some time off from touring and recording. The new lineup recorded and released Sadistic Symphony with vocalist Morgan Thorn in 2001, but O’Connor re-joined the band for live dates in the US and Europe in support of the new album.

There were no new releases by Vicious Rumors in 2002 or 2003. During this period, band leader Thorpe was asked by long time friend Daniel Jones of rock & roll band 7th Orderto take part in recording sessions, alongside veteran British guitarist Martin Pugh (of Steamhammer, the 1st Rod Stewart solo album and Armageddon[21]) and drummer Tim Kelliher (of Randy Hansen‘s Machine Gun), for their The Lake of Memory album (released on the Big Island Sounds label in 2007). Several tracks prominently featured Thorpe, and the album enjoyed a great deal of worldwide radio airplay

In 2004, in order to celebrate the 10th anniversary of the band’s “Word of Mouth” release, there were several live reunions of the 1994 Vicious Rumors lineup (Thorpe, McGee, Sisco, Howe, with O’Connor on vocals). 2005 saw the release of the band’s Crushing the World DVD, which featured both current and historical Vicious Rumors lineups,[24] and included several previously unreleased tracks: “Poveglia”, “Broken Wings”, “Fight”, and “Immortal”.

The album Warball (co-produced by Juan Urteaga) was recorded and released on the Mascot Records label in early 2006. Members Cornbread and O’Connor left the band prior to its recording, but classic-era VR drummer Larry Howe had returned. Also former bassist of the classic line-up Dave Starr, vocalist James Rivera (Helstar) and guitarists Brad Gillis (Night Ranger, Ozzy Osbourne) and Thaen Rasmussen (Heathen, Anvil Chorus) contributed to the recordings of the new album. Worldwide sales were excellent and reviewers universally saw the Warball album as a genuine “return to form” of a more traditional Vicious Rumors sound after the more experimental releases of the post-Carl Albert incarnations of the band. Stephen Goodwin stepped in for Starr to serve as Vicious Rumors’s touring bassist, and the band played several dates in Europe, includingshows with Agent Steel, Hammerfall, Girlschool, Nazareth, and Heaven & Hell.

Upon the band’s return to the US, Ronnie Stixx (Divine Ruins, Blood Redskies, Shadowkeep) took over as an interim replacement for the a departing Rivera. Rasmussen was replaced by Kiyoshi Morgan as second guitarist. Stixx was eventually replaced by Brian Allen (Last Empire, Malice).

In 2009 – Thorpe and Howe (alongside Allen, Goodwin and Morgan) acknowledged the 30th Anniversary of the inception of Vicious Rumors by performing songs from their debut album Soldiers of the Night with former singer Gary St.Pierre at the Headbangers Open Air Festival. In 2011 – Mark McGee, Tommy Sisco and Kevin Albert—the son of late vocalist Carl Albert—sat in with the band for their performance at the Keep It True Festival, also in Germany.
The band was now signed to SPV Records, and their tenth album Razorback Killers was released on March 28, 2011. Several guests joined them for the sessions: Mark McGee, Brad Gillis, and Testament guitarist Eric Peterson. The album also marked the recording debuts of Goodwin, Morgan and Allen. The band then departed for an extensive European summer tour, headlining 60 shows and supporting Hammerfall on 30 shows. In early 2012, the band took part in the infamous heavy metal sea cruise, 70000 Tons of Metal.

In late 2012, after a series of summer performances in Europe, the band released a live album, recorded on tour with Hammerfall in 2011, engineered by Pontus Norgren (Hammerfall guitarist and FOH engineer for King Diamond, Candlemass) titled Live You to Death in November 2012

A new studio album, Electric Punishment, was recorded and released on the SPV label in 2013. For their subsequent European tour, James Rivera returned to replace vocalist Allen. Slovenian instrumentalist Tilen Hudrap (Thraw, Keller, Wartune) took over for the departing Stephen Goodwin on bass. Thaen Rasmussen and Bob Capka alternated in the 2nd guitar role. The band had played more than 70 shows in 2013, including several metal festivals (Alcatraz festival, Metaldays, Stonehenge festival, Bang Your Head festival, Headbanger’s Open Air, Turock Summerfest)—and a pre-show performance for the Bang Your Head!!! event in Germany again featured a special guest appearance by Kevin Albert. For the band’s American tour, Dutch singer Nick Holleman (Powerized, Methusalem) took over as vocalist. The band continued touring into 2014: again playing the “70,000 Tons of Metal” cruise (playing their “Digital Dictator” album in its entirety for the first time in the history of the band)—as well as several European summer festivals and numerous live club dates. A live album titled “Live You To Death 2: American Punishment” was released in June 2014, the first official release by the new VR lineup, consisting of Thorpe, Howe, Capka, and European members Hudrap and Holleman. According to the band’s web site, their first-ever live dates for South America have been scheduled in December 2014. The band will play in São Paulo, Rio de Janeiro, Rio Negrinho, Buenos Aires, Curitiba et cetera. A new studio album is planned for 2015.

We use cookies to ensure that we give you the best experience on our website. If you continue to use this site we will assume that you are happy with it.OkPrivacy policy